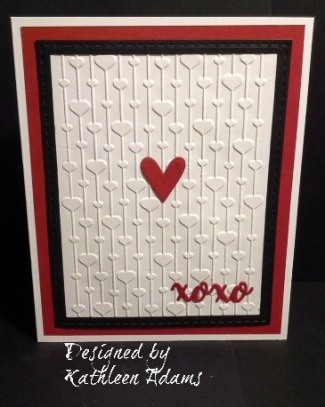 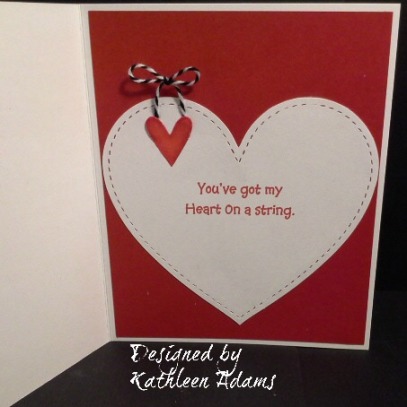 This is the second week of my being the Hostess of the month over at: Crazy4Challenges

So my second challenge for all of you who like to play along is to make a Valentine’s Day card.  February 9th is actually National Tooth Ache Day!  I know!  Who makes up this National Calendar of Days?  But Thursday is Valentine’s Day!  So here’s the steps to my Design Team inspiration card. 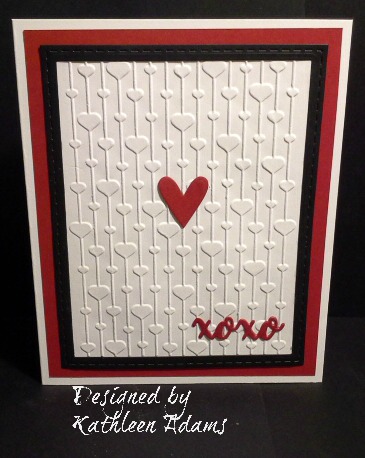 I used a heavy 110 lb. card stock because I like the deep embossing that results from heavier paper.

Step 2:  Create a frame for the embossed panel by taping together, the largest and second largest dies in Elizabeth Craft Designs: 1120 – Stitched Rectangles

Now adhere the taped two dies onto black cardstock and run through your die cutting machine.  The results will be a stitched black frame that fits perfectly over the embossed panel.  Don’t adhere them together yet.

Step 3:  Create a base card by scoring a pc. of  white card stock at 5.5″ on the long side.  Fold over for a book fold card.  Trim to 5.25 x 6.50″.   Cut a rectangle from red card stock (any weight} that measures 5 x 6.25″.  Adhere to the base card, centered, leaving a 1/8″ border on all sides.  Now adhere the white embossed panel onto the red panel, again centered.  Now adhere the black frame over the embossed panel.

Step 4:  I used a decorator “heart die” from a discontinued set from Karen Burniston, but any small heart die would work or even a sticker.  The “XOXO” sentiment is from Elizabeth Craft Designs:  1269 – Love Sentiments

Step 5:  This step is optional.  For the inside of the card: 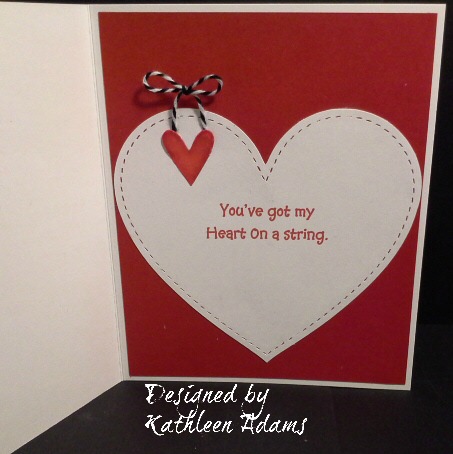 Cut a red card stock rectangle that measures 5 x 6.25″ and adhere to the inside right of the base card.  I printed the sentiment I created in word on white card stock and then cut out the large white heart with my Silhouette machine.  I cut the same red heart as on the front for the little red heart and used black and white baker’s twine to make it look like the red heart was hanging on a string!

Thanks so much for taking a look.  Please join us over at: Crazy4Challenges this week!  We want to be inspired from your Valentines Card.

This weeks challenge is to make a Valentine or card of appreciation.  Well, another Valentines card it is!

Step 1:  In Silhouette Studio, using the file “Nested Hearts”  resize to make a bunch of hearts in 3 sizes with both pink and red cardstock:

Step 2:  Now cut two of the “Wheelbarrow” pc. from the below die set:

Color one of the “Wheelbarrow” pcs. with Copic Markers.  On the second pc. color only the edges so that no white will show when you glue the pcs. together.  Don’t glue together yet!

Step 3:  Cut from this die set below once in white and once in red:

Step 5:  Make the featured raised panel.  Cut a pc. of coordinating solid color cardstock that measures 5.25 x 4″.  Adhere the largest white “Wavy frame to this rectangle.  Add the red negative pcs. from the same red frame as the white one into your white frame.

Glue the white with colored edges “wheelbarrow” pc. to your panel.  Then glue the fully colored wheelbarrow over the first one BUT don’t glue the top of the wheelbarrows so you can tuck some hearts inside the “wheelbarrow“.

Step 6:  From the set below cut “Love You” from red cardstock and the “xoxo”.

Step 7:  Finish the panel by adding the hearts and sentiment as shown.  Add dimensional dots under some of the hearts and adhere some flat to the panel.  Start your first layer of hearts by putting a little dab of glue on the bottom pointy end of the right side of four largest hearts and tuck into the top layer of the Wheelbarrows and then stick a dimensional dot under the top of this layer.  Keep adding hearts, some lifted with dots and some flat as you like them.  Add the sentiments.

Step 8:  The last step is to adhere the panel to the card also using foam dimensionals.  For this step I used large square foam dimentionals.

For the inside of the card I used another of the red Wavy frames, the little hearts pc. that comes from the very center and the “xoxo”.

Thanks for taking a look and I hope you’ll try your own version of this card.

This week’s theme for the “Crazies” challenge is to show us a “heart”!  There are so many ways you could make a card with this theme.  I decided to make a Valentines Card.

If you’ve been following me, and please do, then you know I am so crazy for digital images from The Paper Shelter.  This adorable image is literally called “How you doin?” and I couldn’t think of a better sentiment!

Step 1:  Size, print and color the image on cardstock with Copic Markers.  My new absolute favorite paper is this one that I learned about on the Kit and Clowder website:

This paper alone will make your coloring better.  I got mine at Amazon.

Step 2:  Using this die set from Elizabeth Craft Designs cut twice.  Once with white cardstock and once with hot pink (cut the hot pink second and leave in the die. (you’ll see why in step 4:

When this die set first came out I wasn’t a fan because all the frames are cut at once.  But then when I saw their Design Team’s cards using these adorable nesting die I had to by a set and now I have all four sets!  The picture below shows the hot pink still in the die and 2 frames I colored from the white cardstock curvy frames.  It also shows the designer paper I thought I was going to use but ended up using something else.  I did however use the one in this photo for the back of the card

Step 3:  Glue the green frame to the image printed and colored cardstock:

Notice I haven’t taken the hot pink frames out of the die yet in the above photo?  It’s because as pictured below I knew I was going to use only the negative pcs. of the hot pink set as shown below:

Step 4:  Adhere the white frame and the hot pink negative pcs. out of the hot pink die set that matches it’s space.  It may look like they aren’t specific to the spaces but they are.  You would eventually figure it out but this tip saves a lot of time and mistakes.

Step 5:  Now cut with a paper cutter the assembled step 4.  With the die set below and the largest die , cut a white mat adhere your “image sandwich” to this mat as pictured above:

Step 7:  Cut a pc. of Designer paper or cardstock that measures 6.75″ x 5.5″.  Adhere to the front of the base card leaving 1/8″ border all around.  I chose this double sided cardstock from Lawn Fawn.

Step 8:  Adhere the image sandwich centered over the front of the card.

Step 9:  Cut four corners from the smaller roof embellishment with this die set from Impression Obsession below and add them to the corners as shown.  The little pink heart above the Hedge Hog or Porcupine (not sure which he is)  is one I had in my “extra parts” container.

Thanks so much for taking a look and I hope you’ll take the challenge and “show us a heart!”  This is the back of this card with designer paper mat I thought I was going to use.

Michaels:  Designer paper I used on the back.