Yep, this week over at: Crazy4Challenges  According to the days of the week calendar, jit’s National Candy Day !  So this week is to put some candy on your project!  I am working on Christmas cards, so I made this card to look like a fireplace with “Naughty or Nice”  stockings hung up.

Step 1:  I began this project by cutting out the pieces of an, apparently, discontinued die set from Elizabeth Craft Designs that was called: 932 – Stocking Solid.  I used Green, red and white cardstock and assembled as shown.

Step 4:  Cut a square that measures 3″ x 3″ from black cardstock.  Adhere it to the card centered as shown.  Now adhere the mantel from step 3 above the black square.

Step 6:  The candy in the red stocking are Silhouette print and cut files.  I had cut from black cardstock, the “coal” for the green stocking.  Then I used a white Prismacolor pencil to write “Santa’s Making a List”.  Here’s another quick look:

Thanks so much for stopping by!

For the last challenge every year each team member chooses a sketch challenge from the 12 months to make a card for this last of the year challenge.  AND, so do you!  I chose the August sketch.

I love this digital stamp from The Paper Shelter.  It is called “Most Adorable Snowman”.  I just love the expression on this snowman’s face.

Step !:  Download, size and print the digital stamp.  Now color it with the medium of your choice.  I colored mine with Copic Markers.

Cut your colored image out with the second largest oval in the set.

Step 2:  Nest the second largest oval inside the largest oval and tape to white cardstock in the nested position and run through your cutting machine to create an oval frame.  Do this step 3 times netting out 3 white oval frames.

Step 4:  Open the card and position the same second large Oval over the front of the card leaving enough room on the bottom edge for a sentiment.  Run through your cutting machine.  Now glue one of the white oval frames around the cut oval.  Open the card.

Step 6:   Add a sentiment.  I used Elizabeth Craft Designs “Merry Christmas”.  I also added 3 snowflakes and some silver line peel off stickers to complete the sketch.

We hope you will choose one of the sketches and enter this last challenge of the year.  And don’t forget to come back on the first Saturday of January to start a new year of Challenges.  I think it’s fun to challenge our creativity and see what happens!  Here’s one last look at this adorable digital stamp which truly is “The Most Adorable Snowman”!

To help me get over my turkey coma, I decided to make a Christmas Pop up’

When you click on the product link above, there is also the assembly video.  You really need to watch the video before you attempt to assemble this die set.

I have been a fan of The Eyelet Outlet for about 5 or 6 yrs. now.  You have to check out this online store for the adorable holiday brads I used on the panels.  They have brads in almost any image you can imagine. Eyelet Outlet The fish tail banner on the front is from Gina Marie’s Nested Fishtails.

That’s It!   I hope you all had a fabulous Thanksgiving

Yes, I’m still making Christmas Cards!  If I don’t get started in September, I don’t have enough for what I like to send out.  Since my friends know I make greeting cards, they expect a handmade card.  Once the season is here there is too much to do to be in the craft room.  So here’s how I made this card.

Add glitter dots to all the points of the 5 parts of the tree: Red/gold Glitter Dots

The little gold star for the top of the tree was in my stash.

I used some dies from a few more die sets: 1010 – CountryScapes -Backyard 2  I die cut the mailbox from this set:

I cut the Holly Boarder out of white cardstock and colored with Copic Markers for  the top of the card from this set: 925 – Holly Border

I stamped the curtains from a tiny little green plaid cardstock and cut them out with this set: 4749 – Window Deco Die 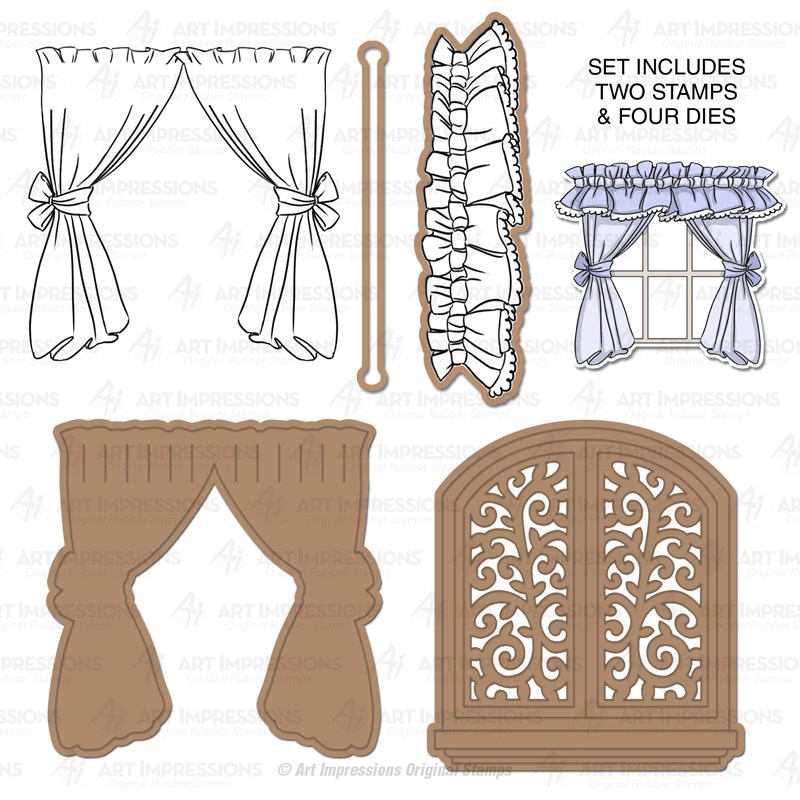 I cut the little bow for the door wreath from: 1460 – Spring Basket

The little grass pc. below the mail box is from a discontinued die set.

Now add all your assembled elements as shown.  Here’s another look:

Thank for taking the time to look at this project.  I love to get comments and read every one!

Good Morning my paper crafting friends.  I’m still working on my Christmas cards so here is one I made using these two die sets from Elizabeth Craft Designs:

Cut the dies in the “small Poinsettia”  to make 3 flowers.  I cut the base pc. 3 times, and all the leaf pcs. 9 times from white cardstock and 4 times from green cardstock.  Here is Susan Tierney Cockburn’s :Poinsettia Assembly Video    I cut, shaped and assembled all 3 poinsettia on their base pc., to place into the end arrangement when I assembled the finished card.

I bought this Christmas cardstock pack yrs. ago from Joanne’s Craft Store and it’s probably no longer available,  but any holiday paper/cardstock would be great.  I loved this one because the ornaments all have subtle red glitter areas on them,  which made this glitter drip from the candles really work or make sense.

The cardstock I chose for the base card is one from Elizabeth Craft Designs called Soft Finish Cardstock in “Dove Gray” because in the close up above, you can see it is pretty much an exact match to the gray in the designer paper, and, I love that is white on the other side which makes a blank slate for stamping a sentiment or anything on the inside.  It is 12 x 12″ 100lb. paper which makes a great base card weight.

Now with a nested oval set from Elizabeth Craft Designs: 1113 – Stitched Ovals take the second and the third largest die and tape them nested together.

As in the photo above place the taped together ovals on a pc. of the same cardstock used for the base and run through your die cutting machine.  Now separate the ovals and using the smaller of the two, cut an oval from silver mirror cardstock.

Using Elizabeth Craft Designs 1467 – Words 3 – Happy Holidays cut two of each word from the same cardstock you choose for the base card and adhere the two layers together.

Now the fun.  Assemble the card by first centering the oval frame you cut by using 2 dies and put the silver mirror stock oval inside the oval frame and place the candles as shown.  Once you like where it is, then place the 3 poinsettias as shown.  Glue everything down including the pine boughs, green leaves and the double layer sentiment.  Here’s another quick look at the card: