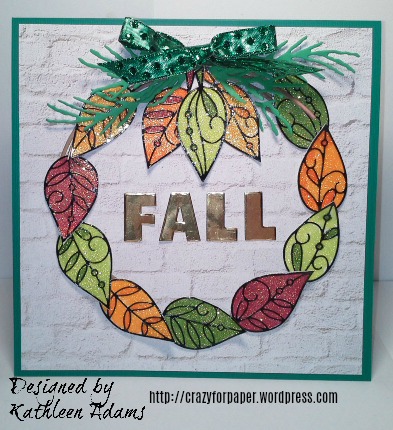 This weeks challenge over at:  Crazy4Challenges is to put a wreath on your card! I decided to make a large wreath from one of my favorite products.  Elizabeth Craft Designs has a product called: Peel Off Stickers The one I used for this card is called Elegant Leaves Sku 2525.

Step 1: Make all the leaves.  First make the glitter paper.  Cut a 6″x6″sq. piece of white cardstock.  Stick this square to a 6″x6″ square of clear double sided adhesive.  Carefully pull the white cardstock without touching the adhesive side.  (I use tweezers)  Now sprinkle with Elizabeth Craft Designs: Silk Microfine Glitter in Warm Diamond

Next, polish the glitter into the cardstock by rubbing it all over with your finger.  This step is what assures that the glitter gets into all the tiny spaces and it really brings out the glow of the glitter.  Now, using tweezers, peel off the leaves and attach them to the glittery white square.  Color them with Copic Markers and fussy cut out: 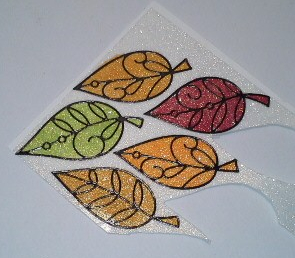 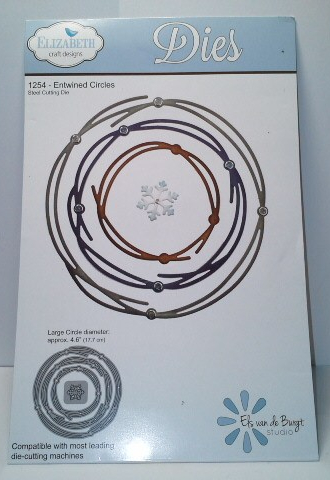 Adhere them together but twist one around so the two layers don’t nest together.  As it turned out, not much of these circles show in the end, but it still gave me the perfect base for these leaves.

Step 3:  Make a base card by cutting a 12″ x 12″ green piece of cardstock in half.  Score one half at 6″.  Fold over for a tent fold card.  Cut a piece of designer cardstock or paper that measures 5.75″ x 5.75″ Square. (I used piece that looks like bricks painted white.) Next Adhere the sandwiched entangled circles, centered onto the card.  Now start arranging the leaves to the circles as shown.

Step 4: I cut the boughs from green cardstock using a die set that I just saw has been discontinued.  However, any greenery die set you have would work or leave this out and just add a bow. I added a shinny green ribbon bow over the green boughs. 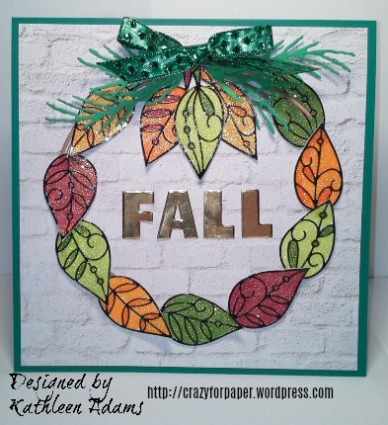 Thanks for stopping by and I hope you’ll join us this week!