Today’s card is an appreciation card for my best friend.  She has been there for me through all the ups and downs of life’s challenges.  Recently, she brought me through one of the biggest challenges I’ve had.  And now that I see that things will go back to normal again and I’m feeling the “happy” again, it was time to acknowledge how much I value her friendship!  She’s also my boss, so a little kissing up never hurts either . LOL!  So let’s make this card. 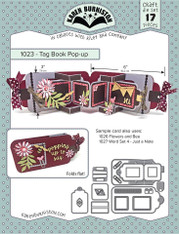 There are a lot of die pcs. in this set which includes decorator pcs that you can use with other die sets and projects.

Cut all the pcs. from cardstock and or designer papers that fit your theme.  As referenced below,  I always like to watch Karen’s assembly video’s before I make one of her Pop – Up cards.  She breaks down what looks complicated into very easy, simple steps.  Plus at the end of the video you’ll get lots of inspiration for using this set from her Design Team.

This is really a great set to invest in because it can be used for any theme you can think of and is so fun for the receiver to open.

I chose Karen Burniston’s: Coffee Charms to make the Coffee and Tea theme. 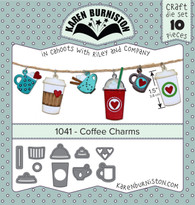 I cut all of the pcs. twice in the “Coffee Charms” set from white cardstock. I cut the “heart” pc. an additional time from pink cardstock.  I colored the pcs. with Copic Markers.

My friend and I made a day trip to Grass Valley, Ca. to see her mother recently.  We stopped at a Deli in Grass Valley and had Ice Tea and Soda with our sandwiches.  On the way home that early evening, we stopped for fancy coffee drinks for the drive back.  I wanted this card to always remind her of this day.

Rather than write out all the steps for the assembly of this adorable set, I really recommend that you watch Karen’s video.  It’s very easy to follow her instructions and it helps you decide what die pcs. you’ll cut with which cardstock and designer papers!

I cut the large and small “tag” pop up mechanism die pcs. from Gray Polka dot cardstock. (see products used).  I cut most of all the little decorator die pcs. from white and pink cardstock so I would have lots of choices when I started to assemble the card. (see products used)  I cut a piece of white cardstock for a rectangle that measures 4″ x 4.75″.  Run this pc. through your machine and a polka dot embossing folder.  Cut the embossed pc. in half to end up with two pcs. that measure 2″ x 4.75″ for the front and back large tags.  There is a die pc. that cuts the same little circles straight edge.  I used this pc. to cut four times from pink and twice from white cardstock.

Using the 1052 – Friends Cut twice with Pink cardstock.  Adhere the two together.

Next, I used a discontinued stamp set from Karen Burniston called “Coffee and Tea”.  I stamped the sentiment for the inside front tag and cut it out with a discontinued die set from Karen called “Labels and Circles”.  to cut it out.  The pink “paper clip” is one of the decorator dies that comes with the “tag book pop up” set. I cut it once from pink cardstock and once from silver mirror cardstock.

I created the sentiment for the inside back tag on my computer and used the same die set used in the front.  I distressed the edges of both sentiment labels with pink PanPastel.

I cut the decorator pcs. for the mountain fold part of the pop up mechanism all out of white cardstock.  I colored the little circles straight pc. with  a N02 Copic Marker.

Once you have all the die pcs. cut you can start decorating and assembling the Pop Up card.  I added pink polka dot gross grain ribbon to the large tags and pink/white Baker’s Twine to the small inside tags. This is the fun step!  Here’s another look at the inside.

Thanks so much for taking a look!

1 thought on “A Coffee Themed Tag Pop Up”