Good Morning Crafters!  For this project for the DiesRUsBlog I wanted to make a “almost any occasion” card.  I love the realistic look of Susan Tierney Cockburn’s GardenNotes dies.  Over at DiesRUs they carry a huge collection.

For this project I chose  Elizabeth Craft Designs 1269 Garden Notes Tulip 2 for the star of this card.

There is a YouTube video showing how to create these cute tulips: Tulip assembly video

I cut enough of the petal pcs. white cardstock to make six tulips.  Then with Copic Marker I “flick” colored from the bottom up to look like the real tulips that are sort of striped.  Cut the pcs. for the stem and leaves from green cardstock and inked the edges with a darker green.  I didn’t adhere them to the project as in the video but instead made each tulip and stuck them in a bud vase filled with toothpicks until I had all the other elements cut and colored’:

I also used: 1297 – Garden Notes Ivy Vine    I cut both of the pcs. in this die set with white cardstock and then with a Copic  Marker I colored green but left white areas to mimic variegated ivy.

To tuck into the bouquet, I used: ECD 1425 – Garden Notes – Maidenhair Fern

The Mats are as follows:  The white was cut out of white cardstock using the largest die from this set: ECD 1173 – Dotted Scallop Circles

The pink mat was cut with pink cardstock with the second largest die from this set:

This die also embosses the cup to show the rim and the curved stripe on the bottom that I colored pink with a Copic Marker.  I stamped the pink flowers on the cup with a stick stamp. 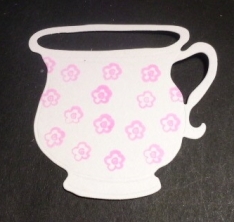 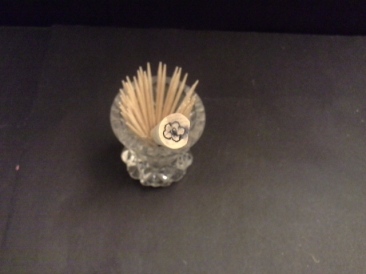 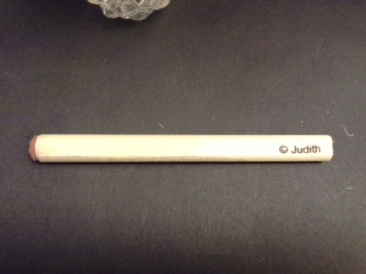 These stick stamps are fun and are from a company called: Stamps by Judith  Visit the site for all kinds of ideas and tutorials using these fun stamp sticks.

I have collected a few:

The “Hugs” sentiment was cut with white cardstock from this set: 1269 – Love Sentiments

Adhere the pink oval to the white oval, then center this oval sandwich to the card.

Next, make a slightly barrel shape to the cup with your thumbs and put two foam dots down the center of the “tea cup” (top to bottom):

Apply glue to the very bottom underside edge of the cup and place it 1/2″ above the lower edge of the pink oval as shown. Don’t remove the backing paper from the dots yet.  Next, play with the tulips and fern until you like it.  Then glue the stems in place.  Next, remove the backs off the foam dots and apply glue to the underside of the cup handle and all around the cup edges and the back lip of the cup.  As you lift the cup back into place, gently push the sides in so that it accommodates the lift in the middle.

Next, add the “ivy” pcs. where you like them and the word “Hugs” as shown.  Here’s one more look at the card in a shadow box frame:

Thanks so much for taking a look and I hope you will check in with the DiesRUs Inspiration Blog  to see what the rest of the team has made for daily inspiration!

1 thought on “A Pretty Spring Bouquet of Tulips”