Today is national Dessert Day!  Who knew?  My favorite dessert is ice cream.  So my Design Team card features an ice cream cone.  This card is intended to be a card to cheer someone up that needs it.

Step 4:  Create the sentiment for the inside on your computer and print it on 8.5 x 11″ white cardstock.  Make a base card from this printed white cardstock.  Score at 5.5″ along the long side.  Fold over and trim to 5 x 7″. 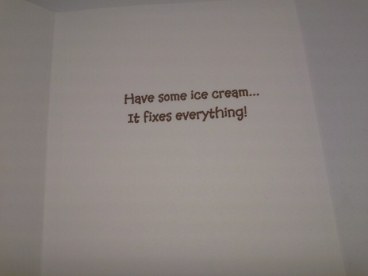 Step 6:  Adhere the white oval to the pink oval and adhere them to the front of the card as shown.  Put a large foam circle under the “ice cream” and attach to the center of the ovals.  Glue down the bottom point end of the cone.

Step 7:  I used a Silhouette file for the sentiment but this could be a card for any occasion.

I also put the same plaid designer paper on the back of the card but it’s an optional step.

Thanks so much for taking a look and I hope you’ll join us in this weeks challenge!