It’s the 3rd week of September which means it’s time for a sketch over at Crazy4Challenges!

As soon as I saw this month’s sketch I thought of something with a window.  But, it had to be a small window to fit within the sketch.  I chose this one from Spellbinders: 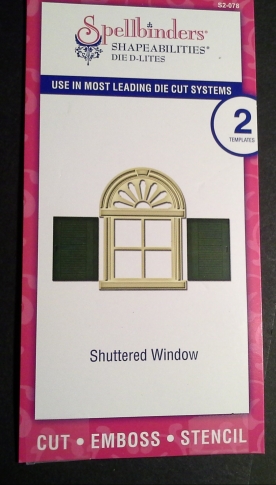 Step 1:  I cut one first out of a pc. of scrap yellow paper see how it would look and where I could cut it to make it a square.  Then I used it to determine where I needed to cut the window hole in the card.

Step 2:  I cut a rectangle the measures 4.25 x 5.75.  After determining where the square hole should be using the yellow scrap window pc. as a guide I taped the 2nd smallest die in ECD 1118 – Stitched Squares to cut a square hole. 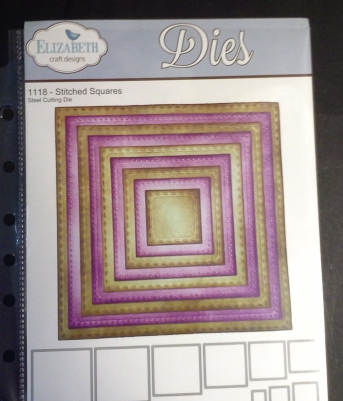 Step 3:  Run the step 2 piece through your cutting machine sandwiched into this Brick Embossing folder by Darice:

Step 4:  Cut the window from the same blue cardstock as the base card.  Trim the top off.  Now glue the “window pc.”  over the square hole as shown.

Step 5:  I just love this little happy Kitten from Frantic Stamper Inc.  Cut and color one of these Kittens.

Step 7:  With the 5th largest or 4th smallest die depending on how you count, cut a yellow circle with 1116 – Stitched Circles.  Glue this circle as the last pc. behind the Floral pc.  Glue the window stack so that the upper two corners meet the upper edge of the circle!  This leaves a little more room at the bottom for the branch of birds. (The stack from top to bottom:  window, film, kitten, floral, yellow circle.)

Step 9:  With white cardstock, cut just the branch pc. from the below die set by Susan Tierney Cockburn for Elizabeth Craft Designs.  Color with Copic markers then trim off the two top branches and glue under the window.  Trim off where needed.

Step 10:  Using white cardstock, cut 3 of both of the birds from this die set By Susan and color with Copic markers:

Step 11:  Cut the tiny ivy from another set by Susan below out of green cardstock.  I veined the ivy with Susan’s Flower shaping tool kit.  Now glue the 6 finished birds and some ivy leaves onto the branch as shown.

The Ivy Leaves were cut from this ECD die set by Susan:

Step 12:  Make a base card by scoring a piece of blue cardstock at 5.5″ on the long side.  Fold at the score and trim to a finished size of 5.5 x 7″.  Adhere the Brick and window piece to the base card.

Step 13:  Cut 4 of the straight ropes from this die set out of white cardstock:

The ropes are almost the same size as the long sides of the “Brick” wall pc. so start with the top and bottom and glue a rope to the edges.  Trim as needed.  Now glue “ropes” to the two sides.  Because I chose to use the branch for the banner and the “birds” for the 6 x’s, I didn’t really have a place for a sentiment, but this card needed one badly.  So I used this die from Lawn Fawn:

I cut it once from white cardstock and once from blue cardstock.  This gave it dimension as well as a shadow so you could see it better but it wasn’t in your face so to spea k.  Glue the two together with the white on top but slightly offset as shown.  Then glue the pc. to the front of the card.

The inside was made by creating a sentiment on my computer, printing it out and cutting it out of ECD’s 1174 – Dotted Scallop Rectangles.  Then I added a sun and the little bird that were honestly left overs from another project.

I know this seems like a lot of steps but they’re all easy, quick steps.  Thanks so much for taking a look.