This is how the card looks folded.  The front of the card.

This is the card inside when you open it up!

This 3rd picture shows how the card looks from the top.

I wish I could take credit for this technique but it was created by the fabulous Karen Burniston for Elizabeth Craft Designs.   Here is a link to her video of how to create this fun and surprising card:

I urge you to watch this video because she shows you every step in creating this card that can accommodate endless themes.  It looks complicated but is really not hard at all and soooo fun to make.  As soon as I saw this I knew I wanted to try and make one.  I had just purchased her set of charm dies “Steampunk Charms” I cut one of each of these charms out of Elizabeth Craft Designs “Soft Finish cardstock” in white and colored them with PanPastels. I later cut another of the small gear piece making 2 of these. 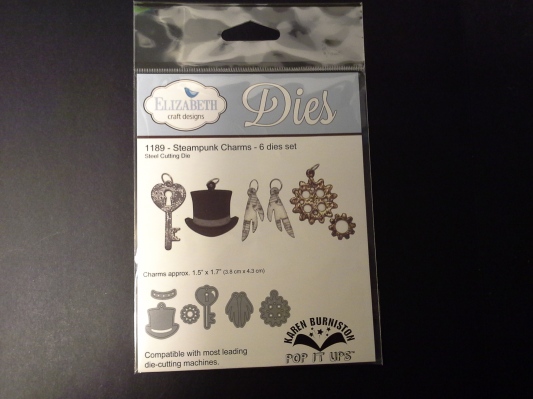 When I saw her video I realized that there were opportunities with this technique to have these charms dangling when you open the card.  So that’s what determined the theme that my card would have.  Next I had to choose the cardstock.  I love the series of cardstock that Els Van de Burgt created for Elizabeth Craft Designs.  It’s called “Through The Lens“.  There are 3 sets in the series: Wood, Metal and Stone.  She took the photos herself and then had them made into cardstock!  WHAT? I love people who see beauty in old discarded things.  Here are the pictures of the two pieces in the “Metal” set that I chose. 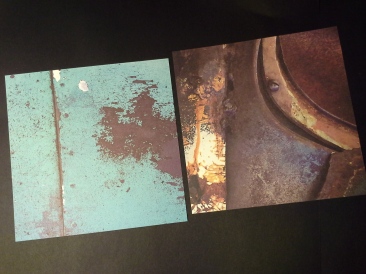 I chose a gold antiqued paper from DCWV called “The Old World Stack” for the base of the card (the pc. in the video that is 3″ x 12″ with the corners rounded with a corner rounder punch from Marvy Uchida.  You can find it on Amazon.

I cut the Adirondack Chair twice out of the brown/gold cardstock  in the left photo above. If you watch the video you’ll see that the two cuts actually make 4 chairs or two sets of chairs connected to each other. (all of these steps will probably only make sense after you watch the video)  I cut the 6 tags out of the turquoise cardstock in the same photo. Below are pictures of the two die sets I used for this step. 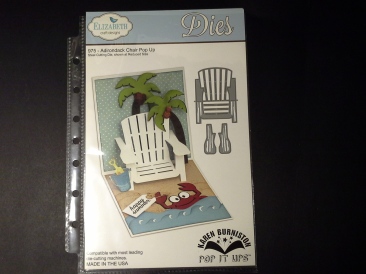 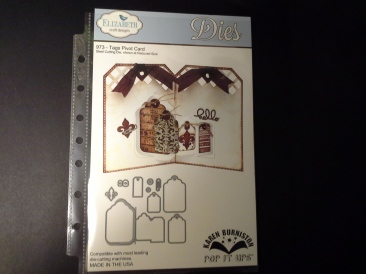 The one on the left is called “975 Adirondack Chair Pop Up”  The one on the right is “973 Tags Pivot Card”.  From the chair set you’ll use the chair “pop up piece” to cut the chairs from.  In the Tags Pivot card set there is a die of a tag  that is the largest of the decorator die tags. This is the piece that you cut your 6 tags from. Also in the same die set there is  a hole protector die. I cut 12 hole protectors and put one on the front and one on the back of the hole in each of the  6 tags.  Tip:  I used Elizabeth Craft Designs “Clear double sided Adhesive” that I attached to the cardstock first before cutting out the hole protectors.  It makes installing them over the holes on the tags “easier” and “faster”, my two favorite words!

The larger two “gears” decorator pieces used to decorate my tags as well as the clock on the front of the card is from this die set from Elizabeth Craft Designs called “Clock and Gears”.  Below is a picture of that die set. 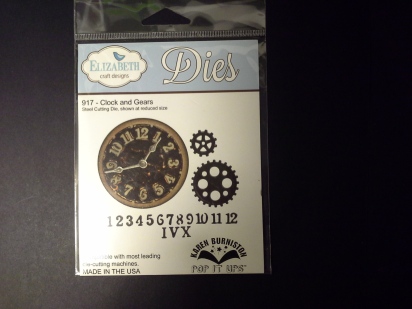 The last step was I decided to add more stuff! So I got out what is turning out to be two sets that I use on sooo many cards.  These two decorator sets are also from Elizabeth Craft Designs.  I love them because you can use them with all kinds of paper or cut them with white cardstock and color them.  The one below is called “1125 – Ropes 1”.  I used the one right in the middle out of black cardstock and cut 2 pieces.

The next set is called “1123 – Jewels 1”.   I used the one that’s sort of gold in the picture and looks like circles and beads.  I cut 2 pieces with that die out of remnants of the turquoise “Through the Lens” paper referenced above.

The sentiments for both the front of the card and the end tag on the inside was created with my computer, printed on white cardstock and cut with the next small tag die in the above pictured “Tags Pivot Card”. I distressed them a bit with black dye ink, added gears and a section of the turquoise “Jewel” strips.  The paper I used for the front of my card and the two sections Karen shows that I added to the center of the opened card is from a printable pattern from the Silhouette Store.  I chose this because I needed something that went with my color scheme and theme but was paper not cardstock.  I also added a black ribbon tied on two of the tags.

I really hope you will watch Karen’s video and see the two cards she made using this technique she invented.  They are so cute and both of her themes are  totally different then mine.  But…..you’ll have to watch the video to see what they are:

1 thought on “A Cascading Tag Card”